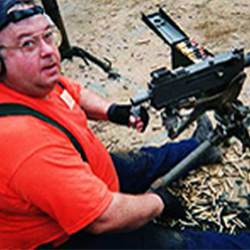 It pretty much vaporizes a three-foot-long iguana at 100 yards. Bottom line, the suppressor works, is a solid piece of art and is a real pleasure to shoot.

I’ve had a year to wring out Elite Iron ‘s Bravo1 suppressor in .308 caliber. The suppressor was specifically bought for a new DPMS LR308. I sent the gun to Dale Poling at Elite Iron to mate their compensator to the muzzle. It’s a nifty compensator that doubles as the mating device for their suppressor. Shooting without the suppressor but with Dale’s compensator, I immediately noted an improved grouping, nearly halved the size of a five round group at 100 yards. As a testosterone plus it looked really cool doing it. The compensator also tamed the rifle down a bit with the rifle staying on target with each round put downrange. The thread protector on the outside of the compensator removes easily and the Bravo1 suppressor screws on like butter, always registering exactly the same ensuring consistency when fired suppressed. Both the rifle and the suppressor seems to like Federal Gold Match rounds. POI with and without the suppressor was consistent with the grouping actually tightening up more with the suppressor screwed on. Definitely made a fine rifle a sub moa machine. Sound suppression was excellent, even with standard .308 rounds. Shooting without hearing protection was a piece of cake and a real pleasure. Using some Engel Ballistics .308 subsonic rounds reduced the rifles retort to that of an anemic BB gun despite the devastating effects of the big round. It pretty much vaporizes a three-foot-long iguana at 100 yards. Bottom line, the suppressor works, is a solid piece of art and is a real pleasure to shoot.

This is a post Template built in Template Viewer

Elite Iron has been a premier designer and manufacturer of professional grade firearms equipment and shooting accessories for over 20 years. We are especially well known for our professional grade rifle and pistol suppressors designed to provide enhanced accuracy and superior sound reduction for calibers ranging from .17 HMR all the way through .50 BMG, including many of your favorite hunting calibers and wildcat cartridges.