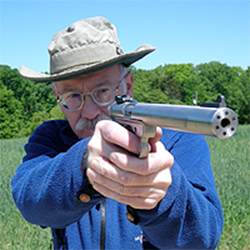 “Elite Iron makes suppressors that any military or police unit seeking a suppressed weapon would be more than pleased to have along on the mission.”

Suppressors can be used for a variety of purposes. Lawfully-owned suppressors are never used for sinister purposes. Rarely are they used for tactical purposes at either the military or police level, although suitability for such purposes is generally considered the gold standard for quality and reliability of suppressor units. Most, however, are used for recreational shooting on the field or home ranges where the owners desire to minimize the noise levels of shooting. Such uses frequently impose much greater demand on a suppressor than any tactical operations actually will impose. A military or police operation may never call for a suppressed weapon to be fired, although it is deployed, whereas the recreational user, on any given session, may fire thousands of rounds in the unit. Additionally, especially in the U.S. where suppressors are so closely controlled, reliability and long-term durability are critical since, especially for the non-government user, getting suppressors repaired is simply a major hassle. Many people, when evaluating suppression, make a major production about the level of noise suppression achieved by a unit. Naturally this makes sense since noise suppression is one of the most important elements of a suppressor and such things can be scientifically tested thereby giving a fair evaluation method in which to compare the various units. I am not equipped to test suppression in such a fashion nor do I really think it is critical to do so for my purposes. Given the fact that my ears ring all the time anyway thanks to exposure to gunfire, I am incapable of distinguishing fine levels of noise suppression. If the noise level is reduced to something akin to an air rifle in .22 rimfire units, I am happy. If center fire rifles sound like a standard, high-velocity .22 rimfire rifle without muffs on, I am similarly pleased. My sub-gun suppressor standard splits the difference between those two standards. Reliability and durability, on the other hand, are something that my friends and I can test with no scientific equipment. Does it work? Does it continue to work? Do I have to do anything special to keep it working? If I can get two “Yes” answers and one “No”, I am very well satisfied. Elite Iron makes suppressors that any military or police unit seeking a suppressed weapon would be more than pleased to have along on the mission. They are well designed, well made, and beautifully finished. If you need to take a shot where muzzle report is obscured or altered substantially, you will find that Elite Iron units will deliver great performance. They also will stand up to the punishment on the field that such teams may inflict on them, whether it is caused by airborne deployment or insertion by sea or the mundane but possibly more punishing long-term carry in the back of a patrol vehicle in major urban areas. But the real test of durability and reliability comes on the informal firing range when users from the most sophisticated, experienced shooter to those who just do not like to wear ear muffs, since it hurts their ears or messes up their hair, will use them shooting hundreds of rounds in a session typically not stopping until time for lunch! Such shooting gets suppressors extremely hot even in rim fire chambering and as with autos, it is heat that is the real destroyer of such things. To stand up to such long-term abusive firing without breaking apart at the seams or getting out of alignment is a test both for the suppressor design as well as the quality of the manufacturer. Elite Iron units that I have tested at this level have passed this test with flying colors. You can depend on them for noise reduction certainly but durability and reliability without hesitation also. They are fine units and you will be as pleased with your purchases as I have been with mine!

Timothy J. Mullin
Attorney at Law
Clayton, Missouri
(Note: Timothy J. Mullin is the author of numerous firearms books and articles dealing with military and police weapons and shooting techniques. Among them are, Training The Gun-fighter, Testing The War Weapons, Special Operations Weapons and Equipment, and American Beauty.)

This is a post Template built in Template Viewer

Elite Iron has been a premier designer and manufacturer of professional grade firearms equipment and accessories for 17 years. We are especially well known for our professional grade sound suppressors that are designed to provide enhanced accuracy and superior sound reduction for calibers ranging from .17 HMR through .50 BMG, which includes all favorite hunting calibers and wildcat cartridges.